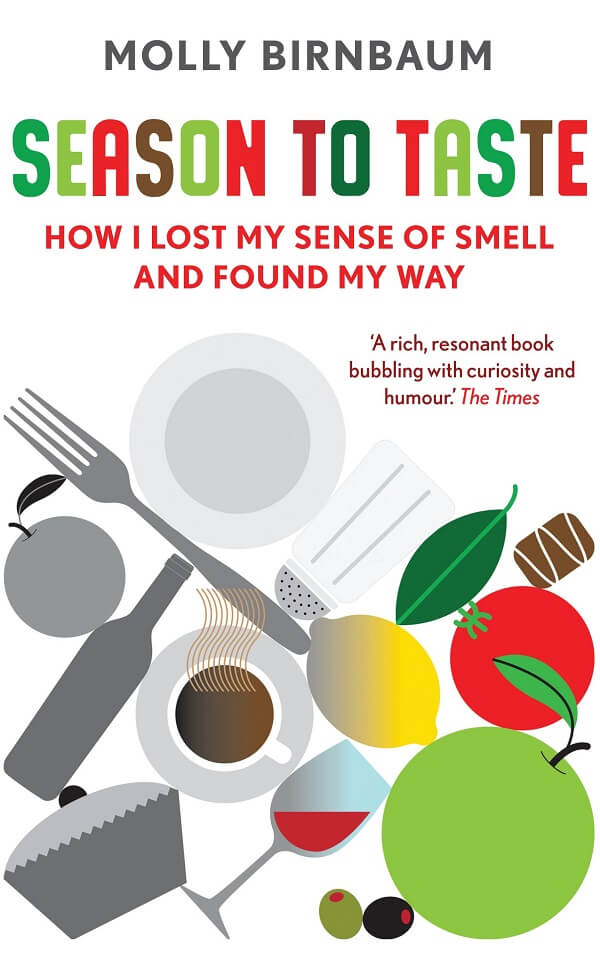 Season to Taste: How I Lost My Sense of Smell and Found My Way

"When an accident obliterated Molly Birnbaum's sense of smell, it also destroyed her dream of becoming a chef, and sent her instead upon a brave and uncertain mission to reawaken her nose. Writing with emotional honesty, intellectual curiosity, and a foodie's feel for descriptive precision, she explores the science of olfaction and pheromones, ponders Proust's madeleine and her own scent memory, and quizzes psychologists, perfumiers, and ice-cream inventors, all in an effort to overcome her condition. From cinnamon and cedarwood to bacon and her boyfriend's shirt, we follow Molly as she gradually rediscovers the scented world and captures in apt, piquant words the rich layer of life that tends to be wordless."

Please note that this post may contain some affiliate links. As an Amazon Associate I earn from qualifying purchases.

What’s best about it?

I headed over to the Kitchen Reader book group a couple of weeks ago to get the email address to admit that I just wasn’t making the time to participate. Despite good intentions at the beginning of the year and purchasing the first two books, life had got in the way so I thought it was time to acknowledge that it wasn’t happening. Then I read the description of the March book, Season to Taste: How I Lost My Sense of Smell and Found My Way by Molly Birnbaum chosen by Katherine Martinelli and thought maybe I’ll hang around here a while longer.

The author, Molly Birnbaum, was an aspiring chef when at the age of 22 an accident caused her to lose her sense of smell – and consequently her ability to taste beyond the basic sweet-sour-salt-bitter. This book is part autobiography, part an exploration of the science of smell – or olfaction as I now know it – and I’ve really enjoyed it. There is enough of the personal to engage and enough science that I feel I’ve learned a lot.

The thought of losing your sense of smell is awful but worse than that were some of the conditions Molly came across while shadowing Richard Doty, a scientist at the University of Pennsylvania’s Taste and Smell Center. There she met a range of people with every olfactory disorder including those who suffered from ‘phantom’ smells. One woman, Linda Woodard has lost her sense of smell but “was thrilled when odors began to return. … The first scent to come back was garlic. But garlic she soon realized, came frequently. Too frequently. … ‘The worst was a summer-fresh ripe peach’, she said. ‘When it approached my mouth, and all I could sense was garlic, I couldn’t eat.'”

I was fascinated by the flavor laboratory Molly visits where scents are concocted from more than three thousand components for the food industry. It sounded futuristic and strangely exciting given I try to avoid processed foods. It made me question where you draw the line and what’s the real difference between artificial flavours and the flavours concocted by the molecular gastronomy inclined chefs such as Ferran Adria and Grant Achatz whose Chicago restaurant, Alinea, Molly visits towards the end of the book.

I think the author felt a similar fascination but concluded that she “wanted simplicity in [her] own kitchen … chicken, some butter, and salt. Or perhaps a few eggs, Gruyere cheese, a dusting of herb. Chocolate, sugar, yolk.” I’m in agreement.

Unlike many of the foodie books I’ve read, I haven’t come away with a long list of things to try – quite a relief really since that list is already at least a lifetimes-worth long – but I am looking forward to the local strawberries coming into season so I can make strawberry-rhubarb pie. This might be commonplace in the US but I’ve never come across it here in the UK so roll on Summer 🙂

If there seems to be anything missing from my review then I must admit that I still have the last chapter to read! Now I’m off out for dinner and planning on giving some more thought to the smell of everything.