Homemade Granola Recipe (For My Sister)

I have been meaning to start a food blog for 3, 4, 5 years – I’m not sure now – but I was held back by never knowing exactly what I wanted it to be like or who it was for.  On Boxing Day this year I mentioned making homemade granola and my sister asked me for the recipe and I thought right, that’s it, I’m going to put that recipe on my blog to share it with her. I thought it would be nice project for that quiet time between Christmas and New Year. So this morning she mentioned in a text that she’d still like the granola recipe and here I am on 9th January getting started.

The blog is going to be for me and anybody else who would like to read it. It will be a place to record my thoughts, share recipes, write about my food memories and generally talk about food. Perhaps it will morph into something more specific in time; we’ll see.

I started making my own homemade granola because most of the shop-bought ones contain dried fruit and I hate dried fruit, especially wet dried fruit which is what it’s going to become when you put the milk on. I also wanted my granola to be reasonably healthy. There are some good premium brands that do fruit-free granola now but I’ve got quite into the routine of making it now. It’s very simple and just requires you to be around for a while to turn it over every 10 minutes or so when it’s baking. 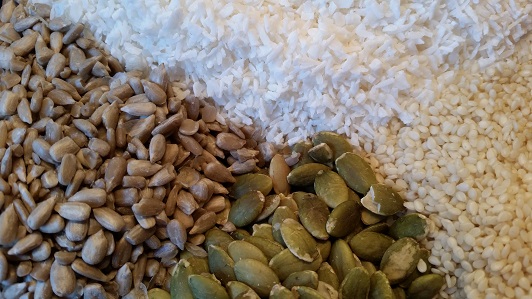 The original recipe came from Alice Hart’s Vegetarian, an inspiring book of modern vegetarian food, where it is titled “Toasted honey and pumpkin seed granola with yoghurt”. My homemade granola is a tweaked version of her “Cherry and coconut” variation – without the cherries and with some extra seeds. Sometimes we eat it like a regular breakfast cereal with milk but I like it best used as a topping for bananas and/or raspberries and yoghurt (honey optional). In that guise it starts many of my weekend breakfasts. 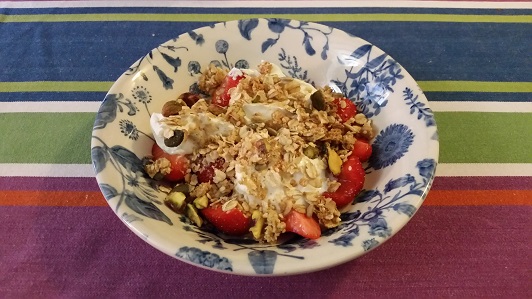 The ingredients are very simple but I think it’s important to use the larger oats: I use Scott’s Old-Fashioned Porage Oats. The texture is much better than if you use the regular sized porage oats.

Serve with milk or fruit and yoghurt. Adapted from Vegetarian by Alice Hart