This leek and potato bake is a gutsy side dish and makes a great potato option as part of a traditional ‘(no) meat and two veg’ style meal.  A lot of my cooking on week nights is one-pot meals or dishes that are served with rice or pasta or noodles but on Sundays we often eat something that’s more akin to a roast dinner, i.e. something with side veg and potatoes and maybe gravy.

When I was a teenager and first cooking vegetarian food I had two recipe books, both from Marks and Spencer, “The Seasonal Vegetarian” by Sarah Bounds and “Vegetarian Feast” by Elaine Bastable. Although they date back to the mid-80s and a lot of the recipes aren’t as sophisticated as ones you find in more recent books, I still cook from both of them. This recipe comes from Vegetarian Feast. 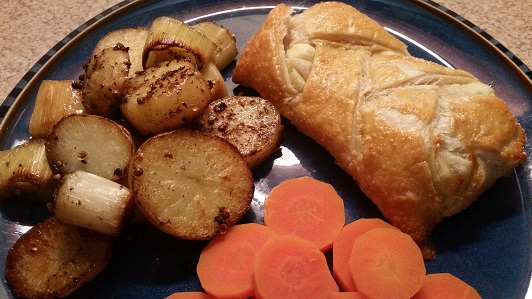 On this occasion I was planning on serving it with Linda McCartney’s Vegetarian Red Onion & Rosemary Sausage Plaits (I love these!) but I obviously wasn’t concentrating in the supermarket because when I got them out to cook they were the Cheese & Leek version.  Not the obvious thing to serve with leeks on the side but it was still good 🙂 It reminded me of going to a local pub that used to serve a pie of the day.  On one occasion when I had it, it was pea and potato pie and they served it with chips and peas! Well, I guess if you order pea and potato pie they’re safe in the knowledge that you like peas and potatoes.

Don’t get too hung up on the quantities in this recipe. The ratio of potatoes to leeks really doesn’t matter. I only had a couple of small leeks to use up this time and I think it would be a tasty way to cook potatoes even without the leeks.

It’s best cooked in a large roasting tin so that there’s room to spread the potatoes and leeks in a single layer. Oh, and beware the steam when you take the foil off – I burnt myself today! 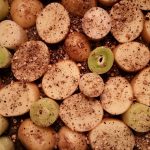 Halloumi And Vegetable Kebabs With A Fantastic Marinade