This Mexican rice pilaf recipe is from an old book of mine by Colin Spencer, “The Adventurous Vegetarian”.  It’s a collection of vegetarian recipes from around the world and when I got it as a student it did seem very adventurous and exotic!  I think this is the recipe I’ve cooked most often from it over the years.

It’s a Mexican dish called Arroz a la Poblana.  I wasn’t sure about the translation as pepper and cheese pilaf because I’ve always thought of pilaf as a Middle Eastern dish but having read a bit more it seems that the distinctive thing about a pilaf is the fact that the rice is first mixed with the oil to keep the grains separate and then cooked in a stock – which is what you do in this recipe.

Grilling and peeling the green pepper is a bit of a faff but the smell when you do it is reward enough plus it really brings out the flavour of the pepper.  You can vary the heat of the dish depending on the amount and type of green chilli you use.  On this occasion I used a very big, mild green chilli pepper which was nice because it gave lots of flavour without being too hot. 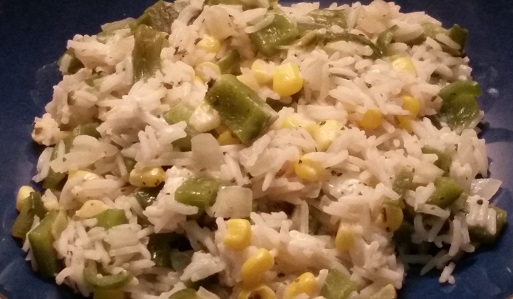 I assume the recipe in its traditional form would use queso blanco, a Mexican white cheese, but I’ve never tried it or seen it to buy in the UK so I’ve used feta cheese as Colin Spencer does in his recipe.  Thomasina Miers, an authority on Mexican cooking, recommends soaking feta in water for 20 minutes first to make it more like queso blanco but I like the saltiness.  As another alternative she suggests Lancashire cheese which you could subsitute if you prefer. 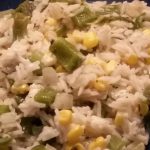