This pearl barley risotto recipe evolved from a couple of other recipes.  It’s an amalgamation of this barley risotto with roasted butternut squash and goat’s cheese from Red magazine and a recipe for farro risotto with roasted fennel and mushrooms in the March 2016 issue of Vegetarian Living magazine (my favourite veggie food mag).  I do like the original Red magazine recipe and I’ve made that a few times since my friend Beckie cooked it for us one New Year’s Eve.  Sometimes I switch the goat’s cheese with feta cheese and that works well too.

Now for a warning:  The barley takes a long time to cook.  You need to allow about 80-90 minutes from when you start adding the liquid.  This has got me thinking that it might be a good idea to do a big batch of the basic pearl barley risotto recipe and freeze what you don’t need immediately in portions.  Then you could defrost the basic risotto any time and add whatever you want to it:  Roasted red onion, butternut squash and cheese like the Red recipe,  roasted celeriac and mushrooms like this recipe, or something else entirely 🙂  What I’m not sure about is how well it freezes and whether the texture would still be good afterwards so I’ll give that a try at some point and report back. 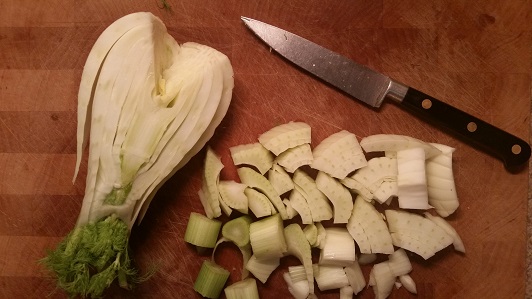 You can serve this with grated Italian-style hard cheese to sprinkle or I’ve stirred in a small amount of leftover Camembert when I’ve had some to use up and that was nice but it’s also good without cheese.

It’s not a very photogenic dish and I was working in electric light because of these dark evenings so I’m sorry for the lack of a tempting photograph.  You’ll just have to trust me that it tastes good! 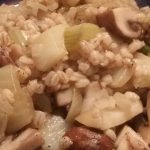