I like all lentils but Puy lentils are a particular favourite.  I love them in a salad with roast carrots and feta and you could also use them instead of canned green lentils in the warm aubergine and lentil salad that I shared last week.  They are a small lentil with a bluey-green marbled skin.  To be called Puy lentils they must come from the region of Le Puy in France.  I have no doubt that a farmer from Le Puy would disagree with me but I think you can quite happily substitute similar lentils grown in other areas which are usually labelled as green and/or dark speckled lentils.  It’s like champagne:  To be called champagne it must come from that specific region of France but you can get very good champagne-style wines from other areas.  The lentils in my photo are actually Suma’s dark speckled lentils. 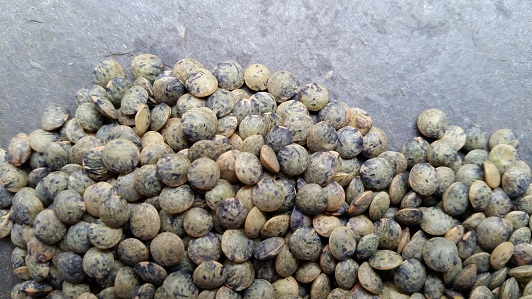 This recipe turns them into a hearty rib-sticking Puy lentil sauce which is great served with veggie sausages on a cold winter evening.  It has evolved from two recipes, a combination of the lentil sauce from the vegetable and lentil moussaka recipe in “Cornucopia At Home” and Nigel Slater’s recipe for sausage with lentils and balsamic vinegar in “Real Good Food”. 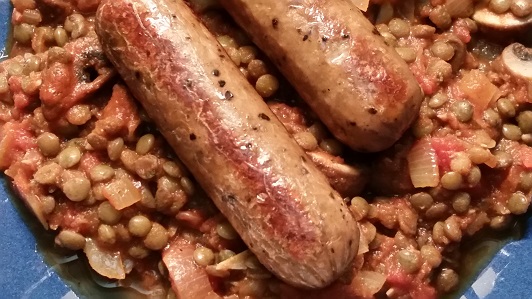 If I’m serving it with veggie sausages I allow two sausages per person (and always have some English mustard on the side).  It’s also good topped with mashed potato to make a shepherd’s pie or layered with aubergines and potatoes for a moussaka.  Plus I could happily eat it on its own.  It’s filling and pretty healthy 🙂 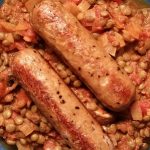